Imagine you are teaching a small child a word for an emotion. You might start by saying when the child is naughty “your mother is angry”, and when you do this you refer the child to an attribute of the mother, namely a behaviour state. On another occasion, you might ask the child “why are you angry?” when it displays that same behaviour state. Without the behaviour state, we could not know that another person was angry. The ability to compare our behaviour with that of others is necessary for the process of giving a name to it, but that is not the reason for the behaviour.

Charles Darwin explored this in his least read book “On the Expression of the Emotion in Man and Animals”. Emotional expression exists in many mammals, particularly social mammals and serves as a signalling mechanism that enables animals to communicate intentions, desires, warnings, etc. This is very necessary in social mammals that don’t have language. Humans have evolved language, but still retain the emotional expression.

Later, you might ask the same child “are you feeling angry?” and piece-by-piece the child builds a concept of anger that we could describe with the following diagram: 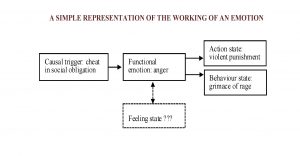 We can separately think about how a scientist and a child each understand this. The scientist can draw upon evolutionary theory, the study of this in animals such as chimpanzees, and observations of humans. I drew the “feeling state” in a dotted line box to indicate that no scientist understands its nature. It is a state of consciousness and this remains a thorny philosophical problem. I also drew the associated arrow as a double headed dotted line because nobody knows which direction the causality flows. Strangely, anger is much easier to understand in chimpanzees: I groom your fleas; you do not reciprocate; I jump up and down and scream at you. This simple point is difficult to determine in humans because they manipulate anger behaviour tactically, often suppressing it in particular circumstances. From a scientist’s perspective the link between causal trigger and the behaviour state is patchy at best and immeasurable at worst.

A child understands this within the context of their family. However, it is clear that anger is a mechanism for punishing those that cheat in social obligations and is essential for regulating the interactions of social animals. For the child, it is a mechanism for teaching it what is and is not permitted, and for the child to make it clear when others are cheating.

If this happens for two emotions separately, then it is possible that the child can grow up mistakenly recognising anger as shame, or some other mistaken pairing. How will this affect them in adulthood?

A chimpanzee reacts to a stimulus and has a limited ability to second-guess that reaction. But a human has a number of capabilities that the chimpanzee does not have: naming emotions (possibly incorrectly); manipulating behaviour tactically; and predicting future emotion (also possibly incorrectly). Actually, a chimpanzee has a limited ability to suppress behaviour, but probably no ability to affect it. This enhanced ability to understand our emotions (and therefore to misunderstand them) creates all sorts of complications for humans. Human reason depends upon an ability to predict the future and understand how we will react to it. The invention of agriculture required us both to predict that food would be scarce in winter and to understand that this would mean that we would be hungry. A chimpanzee won’t seek food until it is hungry, but a human predicts future hunger and calculates the action it needs to undertake now to avoid its future occurrence. This could mean planting seeds or going to the supermarket.

Imagine that the child in our example is calculating the action it needs to take to avoid future anger, but it is misidentifying that emotion as shame. It will calculate the wrong response to that predicted future; most probably it will withdraw for fear of doing something that prompts the disapproval of others. You might imagine that this would only happen occasionally, but this is a person who suppresses anger and therefore lacks a mechanism for punishing the asocial actions of others. They are therefore likely to be the target of them more and to have no means of dealing with it. Therefore, they feel its consequence more severely.

They convert the anticipation of asocial actions of others into the avoidance of the disapproval of others. This is a set of symptoms approximating avoidant personality disorder.

There is no scientific hypothesis as to the cause or structure of personality disorder. But if this logical hypothesis is correct, that would not be surprising. The deviant actions of the patient are triggered by an anticipation of a future emotion––something that a scientist cannot see or measure. We cannot ask the patient why they are reacting as they do because the reaction is to a misidentified emotion. There is no empirical way of determining that the patient is doing this because the only evidence of an emotion is someone else is behaviour. And this patient is suppressing it both for the emotion being misidentified and for the emotion that they think it is. All the causal elements are invisible and a scientist without data is like a fish out of water.