The following is an extract from Matthew Blakeway’s book, The Logic of Madness:

Let us take the following to be a model of a very simple human who has got only two emotions, but has still managed to get them into a tangle: 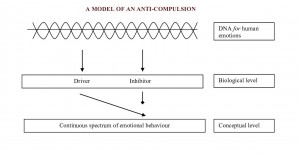 This person has one biological emotion that drives action and another that inhibits action, and by a compound manipulation of the behaviour, they have found themselves in the situation where the Biological Stimulus for the driving emotion has become the Affectation Stimulus for the inhibiting emotion; so only the behaviour for the inhibiting emotion is displayed. We can consider first the two emotions separately, and then look at the inter-causality that relates to the crossing over.

With respect to the driving emotion (in isolation), they suppress the behaviour and are therefore able to recognise that emotion in other people, but remain unaware that they are experiencing it themselves. The biological emotion is supposed to drive an action, but is not doing so in this case. Clearly, this situation is self-destructive in isolation: they think they are experiencing an emotion that inhibits action. Therefore, trying to compute an action that achieves a future emotional goal is irrelevant in this case. To optimise their biological fitness, they should be calculating the action that the driving emotion is supposed to drive. However, they do not acknowledge that they experience it because they do not demonstrate the behaviour.

Let us consider the impact of the crossing-over.

Driving emotions are feedback mechanisms. They arise because the human (or animal) needs to rectify something, and the stronger the need to rectify, the stronger the emotional urge. A human, at any point in time, will have multiple emotions, and the one that is strongest will tend to become dominant over the others and drive the action that occurs next. If you are both hungry and thirsty, then the stronger emotion will determine whether you drink or eat first. This action cancels out the urge to act. Here, the driving emotion is an Affectation Stimulus for an inhibitor; so the action does not occur and the feedback mechanism is broken. Failure to act on the driving emotion results in it becoming steadily stronger, leading the inhibition to become all-embracing and eventually consume the individual. The inhibition will become this individual’s dominant emotion on an almost permanent basis. The negative feedback mechanism has turned into a positive feedback mechanism, where the urge to not act keeps getting stronger. This is a compulsion to not do something that biology dictates you should do¾what I generically call an ‘Anti-Compulsion’.